Skibbereen Athletic Club was formed in 1959 and is one of the oldest athletic clubs in the country. Athletics in the area goes back much further than this, a sports committee was established in town and it organised an annual open sports. This was very popular and in 1936 the Southern star reported that amongst the prizewinners were athletes and cyclists from as far away as Limerick and Dublin. It helped that people could travel to Skibbereen by train at that time. 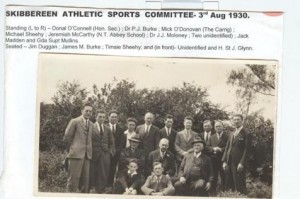 Folklore has it that there were some outstanding athletes in Skibbereen town and the surrounding parishes, they competed at these sports as individuals and the records show they acquitted themselves very well.

Once the Athletic Club was formed it then organised the open sports, sadly, the last one was held in 1973, the open sports as such were on the decline in Ireland due to lack of support from the athletes, they no longer wanted to compete on grass as tartan tracks had become popular.

In 1967 a school sports was introduced and was held in Rossa Park, the purpose for such an event was to encourage boys and girls to compete with the club. It was was a great success with some fine talent as usually unearthed at these sports, the highlight  is still the relays with up to twenty teams competing in some races.

All down through the years the club had no permanent home, athletes trained at different times on the rugby pitch, GAA pitch, the showgrounds and the bishops field, by kind permission of these organisations.

In 2002, the club got a fantastic break when it joined forces with the local soccer club and set up home in a new complex at Baltimore Road, Skibbereen. A training track, weights, and jumping facilities are provided, the track is floodlit with dressing rooms also available.

To help finance this project a marathon cycle event was staged at the Square one Saturday for twelve hours which raised a lot of money, the business people of the town also made generous contributions to the cause.

Skibbereen Athletic Club caters for young athletes aged 8 yrs and upwards, as well as ladies and men, senior and vetearns .Its catchment area is from Rosscarbery west to Goleen.

The club has been very succesful down through the years and it has been blessed with some fine mentors who have given their time unselfishly to the betterment of athletics in the area. Skibbereen athletes have worn the red and white colours of the club with distinction over the years, winning County, Munster, All-Ireland and European as well as world championship medals over the years. Some have represented their country on occasions and have brought honour and glory to the club.

The current officers are as follows: